How Determination Can Change Your Life 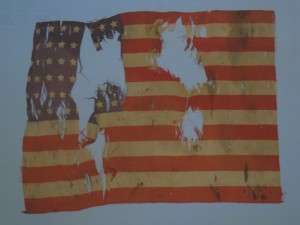 I’d like to share a personal family story since it’s almost Independence Day here in the states.  The reason for this story is two-fold; first, it’s a story about an American flag and second, because it’s a great example of how the power of choice and determination can change your life.

My grandmother Zabel, and her mother Varter were both 100% Armenian on my father’s side of the family.  Born in the United States, my Grandmother traveled back to Armenia with Varter to visit family twice when she was a child. My Grandmother was only 10 years old when they went back for a second visit in 1914.  This was during the time of the Armenian massacres and though they were American citizens, they were still Armenian.  Trying to flee the massacres, they were traveling through the desert from Harpoot to Constantinople where her Uncle, an Archbishop resided. With them were 7 others, including nieces and nephews on her father’s side, and a couple of family friends. On their way, a band of Turkish soldiers stopped them and threatened to kill them.  But sewn to their covered wagon was a small American flag. In that instant, Varter showed them the flag and yelled out, “You see that flag! If I don’t go back the American’s are gonna come and get you, they’re gonna retaliate!” She fought and argued with them, she stood her ground, she didn’t stop and it worked. They were released and made their way to Constantinople to safety.  Eventually, they made it back to the States and never returned again to Armenia, while others were never heard from again. Throughout her life, my grandmother repeatedly said that it was an absolute miracle that the Turks ever let them go, a miracle from God.

Two months ago, my father gave me the actual flag that was sewn to that covered wagon, and the photograph of that flag is shown here for this article.  When I held it, the first thought that came to my mind was, “My goodness, without this little flag, I wouldn’t be here today.”  And it inspired me to share the story. Through my great-Grandmothers determination and wisdom to have even carried the flag with her to Armenia, she changed the lives of everyone on that wagon, and therefore, the lives of generations to come.

We have no idea the reaching affects of our decisions, or the affects of how one determined action can change an entire outcome.  Therefore, we must choose wisely, because what we choose determines our fate.  What chooses us, determines our destiny.